The Big Apple Continued (the city…not the technology)

View from Broadway and 79th – NYC:

Mood Reading: ZZZZZZZZZZZZZZZ’s (Came down with a nasty stomach flu that started Sunday evening and culminated yesterday – have slept for a day and a half!)

*My apologies – would have posted this sooner but was otherwise occupied hugging the bathroom toilet.

When I arrived in New York City to meet with my editor, we had landed in a light drizzle. The following morning, I threw open my hotel curtains expectantly. Today was a new day – the day of my meeting and a day I’d been looking forward to for weeks! I have reached the last chapters of my novel and we were to discuss the sequence and details of its climax, the final draft, and the next phase – publishing and marketing.   Ever the optimist, I was sure I would find a bright sky and warm temperatures to go with my buoyant oh-so-sunny mood. How then, could I be oh-so-wrong? When I opened the drapes I discovered brooding dark skies and sheets of rain pummeling the streets and pedestrians below, the latter battling like hell with seemingly schizophrenic umbrellas.

Refusing to let my spirits be dampened along with all the cats and dogs –
I was determined to wear the appropriate attire for my business meeting – an outfit I thought befitting the occasion. I donned my knee high leather boots, a beautifully chic brocade coat ala city style (well, chic to my mind anyway), took an inordinate amount of time with my hair and make-up – and having convinced myself I fit in as much as anyone else in the city for business, headed out the hotel door with my brolly smugly under control.

That all went to hell in a hand basket in

no time and I needn’t have bothered.

I wasn’t on the street 12 minutes before I found myself in a raging battle with my umbrella, the rain pelting me from the side and running down the arms that were trying to hold onto it and within ½ an hour, my leather boots were soaked as well as my feet and oh-so-stylish-but-totally-ineffective brocade coat. I ducked into a coffee shop for a cappuccino to regroup. Somehow this isn’t exactly what I had envisioned.

With my plan to poke around a few of the neighborhood shops before my meeting derailed completely, I dashed into a nearby shoe store and bought myself a pair of practical (and colorful) rubber boots. With the perception I so carefully orchestrated in my mind’s eye regarding ‘NY style’ all blown to hell along with my carefully coiffed hair, I decided I might as well have some fun and bought

the most kinky ones I could find. I then walked back to my hotel and changed into my jeans and a sweater, my new funky boots, and the REI waterproof jacket I shoved in my bag at the last minute – the one that can be seen in virtually all my vacation photos of the last 3 years. It’s lightweight, easy to pack, and well….waterproof.

Now suitably attired for a good flaneur around the neighborhood, I still had a good hour to poke. I found a great used bookstore where you couldn’t even walk

because of all the shelves, first editions, and obscure titles. It had a ladder in the middle of the narrow space to reach the upper hall of floors, replete with a delightfully eccentric proprietor only too eager to share his most recent

prized acquisitions (apparently great works who’s titles I pretended to know but hadn’t a clue.) Out of respect for his obvious passion and literary acumen, I smiled and nodded enthusiastically – and wondered (and worried) secretly if mine would land eventually in his ‘obscure titles’ aisle.

Next it was on to Zabar’s, the kosher gourmet food shop around the

corner on Broadway. It’s like the kosher version of Dean and Deluca (only not so trendy) with a touch of Sur Le Table and Smith and Hawkens thrown in for good measure. It has any and every culinary delight you could possibly want and I could have spent days 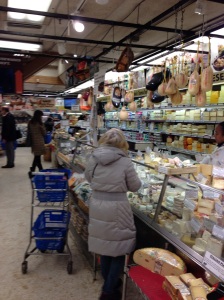 just perusing the cheese aisle alone. Upstairs had a variety of kitchen wares, appliances, and hardware store items and I’m quite sure I didn’t even make it to every nook and cranny in the place. If only I had another few hours….

Soon enough it was time to make my way to the metro and catch the train to the financial district where I was to meet my editor. I bent my head against the still driving rain and headed for the subway. The Japanese restaurant she had chosen was right off of Wall Street and I made it there early, in time to park my umbrella and shake the water off of my jacket. I hoped my editor would think my attire was just the hip, western laid-back look of a confidant writer caring less about fashion and more about ‘her work’ (ahem) and was supremely relieved when I saw her walk through the door in a Columbia down parka and sweater and jeans too. My editor, Supurna, is young, bright, energetic and laughs easily – and we have great chemistry which is why I love working with her. After catching up on our respective lives, we set down to business and were soon in the throes of the final plot lines and scenes of my novel. The meeting went great – lots of exchange of ideas, climax suggestions, and a direction ahead for the next phase. I came away as I always do, motivated and enthusiastic once again, and eager to finish up.

I celebrated that evening by taking myself to see Book of Mormon, which was a riot! Half the cast looked like most the kids my boys went to high school with. I sat between a Frenchman and a

Norwegian woman who both happened to be solo as well and we enjoyed some before-show chatter while drinking our white wine out of what amounted to adult tippy cups. (which seemed wholly appropriate for this show.) When I left the theater to catch the metro back to my hotel, the downpour had started again in earnest and I was thankful the metro station was only 2 blocks away. I had myself a late dinner of duck at a restaurant close to the hotel and called it a night, feeling entirely satisfied (and proud of myself for braving the elements ) for a day well spent.

My last day in NYC was a day to myself. I wandered. And wandered. With no meeting to prepare for or appointments to make, I had the luxury of following my whims. My whim led me to Soho for an afternoon of strolling, shopping, and lunching. The weather had cleared, it was warm and sunny, and I just enjoyed being out in the city. Being the 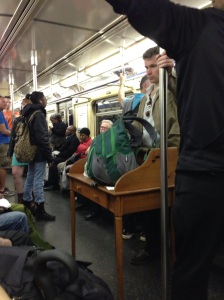 shopper extraordinaire that I am, I’ve been known to schlep dishes, vases, metal racks and a variety of unlikely objects from my excursions (even hauling an antique soup tureen from my trip to France in my carry-on last fall) but I must admit, even I was surprised to see a guy get on the subway with a desk. Yes, you read that right, a d-e-s-k. In typical NY fashion, folks just made room and stepped aside, and the guy looked like it was the most natural thing in the world for a commuter to be carrying on the train. My kind of guy.

That evening I’d made arrangements to meet my niece and her husband for dinner. They both work for CBS Radio, in a skyscraper right across from Radio City Music Hall. Megan and Chris moved to the city last fall from California, taking the plunge to live and work in the thick of things. Megan suggested we meet at her office, she’d show me around the place, then we’d grab a drink and some girl-talk before meeting Chris for dinner in Greenwich Village (she does have my family genes after all.)

I took the metro to Manhattan, walked the several blocks to her building, and she came down to greet me on the street, to pluck me from the

throngs at the intersection of 50th and Avenue of the Americas. I have walked past her skyscraper several times in past visits (my favorite bakery – Magnolias – is just down the street) and never in a million years imagined my once little curly haired big smiled niece ever working there, however I can’t say I’m surprised. She’s always been outgoing, quick witted, smart on the sassy side, and fearless. At the moment I saw her across the intersection I couldn’t help but think of the time she visited me in Lake Tahoe 6 or 7 years ago (before she had met Chris) and saying,

“you know Auntie Debbie, I don’t feel like I’ve been anywhere. There’s so much I want to see and do.” I have to admire her, them…they are out there doing it, living it – and I’m proud of them that they took the chance when Chris was offered the opportunity last fall.

Megan’s office is impressive, on the 40th floor with views of the most expensive real estate in NYC – Times Square, the Hudson..amazing.   Chris’s office is

4 floors up so it’s a convenient commute for them both. After being shown around the hollowed halls of CBS (still reminding myself that this was once the girl that would sing Belinda Carlisle songs into a hairbrush and somehow manage to get not only my boys to play backup on turned over waste baskets, but all the adults in the room to watch) we headed for the wine bar. It

was noisy, fun, and packed. After a good gabbing and catching up we headed on the Metro to Greenwich Village where we met Chris for Oysters at the Mermaid Oyster Bar and had a great meal afterward. It was great to hear their stories of life in the city, schlepping groceries, taking the dog down several flights to pee, doing laundry in shifts in another building…But the flip side is they get to live in one of the

most captivating, energetic, diverse and exciting cities in the world. Yes, as Megan says, for every magnificent thing about New York City, there is a hundred crappy things about it too – from standing in the snow waiting for a bus (this from the California-freeway-driving-commuter girl who

had never used public transportation before) to choosing whether to buy milk or oj ‘cause you can’t carry them both home. But then again, you have New York City at your feet, the culture, the arts, the center of it all….how can you even weigh that against dirty laundry?

There is no other place like it, and no other life experience like it either. I’m sure that wherever they end up ultimately in their careers, their lives, they won’t ever regret making the move, and grabbing this once in a lifetime opportunity.

As for me, I can’t wait to go back – but next time I’m taking a better umbrella.