View from my niece’s skyscraper office in New York City: 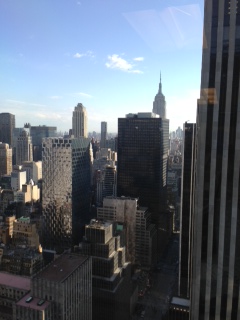 Mood Reading: ZZZZ’s (slept like a rock last night – still jet lagged so went to bed early and woke up late – after 3 cups of coffee – I’m almost back to my perky little self)

The weather forecast for New York City last week said “cloudy – chance of showers – and clearing by the end of the week”, so when

my flight from Reno touched down last Tuesday, I wasn’t worried. I’d packed my brolly, had 2 pairs of knee high boots with me and when I got off the plane, the light drizzle was a welcome relief after the Nevada drought I’d just left. Little did I know… I should have packed a snorkel (as my friend Cathy suggested.) 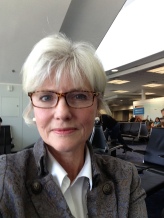 look forward to, not only for it’s obvious practical and motivational benefit regarding my novel, but also for the great opportunity (read that ‘excuse’) to come to the city to see the sights, take in a Broadway show, devour the best chocolate

I landed Tuesday evening and made my way to my hotel on the Upper West Side, just a few blocks from Central Park, a great neighborhood with lots of shops and restaurants to poke arou… er, flaneur – ize. I unpacked and immediately realized I’d left my cell phone charger at home.

“EGAD – tres catastrophe!!” I thought to myself, feeling every inch the vulnerable country bumpkin that I am.

I Googled the nearest Apple store and hopped on the metro located right at the end of my block. I emerged a few stops later within steps

of the biggest Apple store I’ve ever seen, several floors of mind-boggling technology and dozens of cheerful, mostly young, knowledgeable nerds to show you the way (and make you feel as ancient as a Roman Ruin, and decidedly as unhip — as only cheerful, young, hip techno savvy New York nerds can.) I felt like Dorothy in the Land of OZ. I soon was led to exactly what I needed (with nary an eye-roll) by a friendly young good looking fellow with the demeanor of a boy-scout helping grandma cross the road, who was only too happy to swipe my credit card into his cellphone – and cheerfully send me on my way.

And oh darn, what did my eyes happen upon as soon as I emerged from the world of Apple – as if I’d reached the end of the yellow brick road after all? But a 3-story Pottery Barn before me – oh my!! Now here’s a great opportunity for flanerie if ever there was one I reasoned, so

decided my Sauv. Blanc and dinner could wait (it was almost 8:00 p.m. by this time – but I rationalized it was only 5:00 Nevada time ) I had myself a good poke (to heck with flanerie – this required some serious shopping skill) and then high tailed it in the high winds to the safety of the underground to return to the ‘hood’ where I was staying.

the time I sat down and ordered my wine, realized exactly how hungry I was. The place was hopping and the maitre-d said the dining room was full, so I happily took a very small table in the bar where b.b. King was blaring and I had a birds-eye view of the locals mingling, greeting, slapping each other on the back, flirting, laughing, ribbing the bartender and in general, doing what folks do where everyone knows your name. Somehow I didn’t for one minute feel an outcast or the outsider, and the maitre-d kindly kept checking in on me. I had a great kale salad

(kale salad must be the ‘in’ thing in NY – and since I love it, I was one happy flaneur. I ate it everywhere, at every restaurant I went to – prepared in a variety of ways) followed by roasted chicken with roasted veggies. It filled the void (deliciously if not very adventurously) and I flaneured around the neighborhood in the rain a bit afterwards to let it all settle and because I simply wasn’t tired.

Suitably satisfied, I finally turned in about 11:00pm, happy to have my iphone alarm at the ready, and looking forward to the 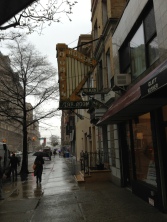 following days meeting with my editor. I confess I didn’t fall asleep right away with the days colorful images still playing repeatedly in my mind.

As I finally drifted off I remember thinking to myself, “yep, we’re not in  Kansas anymore, Toto….”

Next time: Part II – The Hood, The Editor Meeting, and those funky rubber boots….