Dinner Guests Are Welcome — Unless They Want Me As The First Course!

View From the Dining Room: 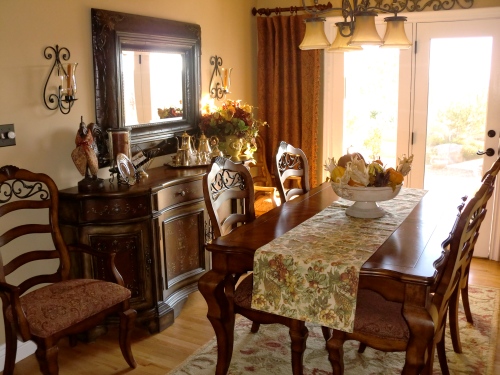 Mood Reading:  ZZZZ’s (Slept much better than I did on Wednesday night!)

We’ve all had them — the unexpected visitor that suddenly appears just as you’re getting ready to prepare dinner, and seemingly wants to hang around.  My unwanted guest was all the more

unwelcome (and creepy) when I realized he’d been silently lurking around the house for some time, retreating into the shadows so I couldn’t see him.  When I finally did notice him,  he tried to skirt the confrontation but alas, it was unavoidable.  When he made his presence known in the middle of my dining room late last Wednesday afternoon, all hell broke loose…

So there I was, sipping my late afternoon cup of tea at the kitchen counter while scanning the headlines on my computer. With Middleton already having her baby, Weiner all but out of the NY mayoral race, and Congress being…well, Congress, I’d settled for a HuffPost article entitled “Sex After 55”

(wasn’t quite sure whether that meant age or partners – was dying to find out.)  The dog was peacefully snoring on the custom cushions on the sofa she believes were made especially for her, and I was just getting to the part about something called ‘performance anxiety’ (darn, must be age) when something caught my eye in the dining room, halfway obscured by the buffet.

I got up slowly and carefully from my stool to investigate and approached very cautiously.  He inched out sheepishly. I froze with sudden recognition when our eyes locked. For one brief moment, neither of us could move. When he finally made the first one…slithering sideways, the realization hit me like a ton of bricks

I calmed myself courageously,  the Practical Side of my brain taking over — “okay, you have a snake in your dining room, don’t panic.  Take a good look and see what kind, then slowly make your way out the French door to the patio and grab the bar-b-que tongs and then carefully approach and remove it —

piece of cake.  PS:  don’t disturb Sleeping Beauty or all bets are off.”

Alright Other Side, you can shut up anytime now.

I followed the directions of the Practical Side.  I carefully grabbed the bar-b-que tongs and crept up on the puny serpent. (It’s true what they say about size y’know… it doesn’t matter when it’s an effing snake in your dining room!)  I couldn’t tell if it was a Rattler.  It was small, it had the coloring of a rattler 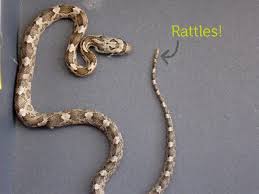 but so do bull snakes.  I couldn’t see any rattles and the shape of the head didn’t seem too triangular but then, I wasn’t getting that close to tell.  The Other Side of my brain was still making a racket so I found it hard to concentrate.  The thing was slithering slowly and lazily, having ventured out completely now from under the buffet, and didn’t seem too bothered by my presence, “Great!  Piece of cake indeed — I’ll just pinch him behind the head and carry him out” said my oh-so-smug Practical Side. In one swift but clumsy movement I made a surprise grab with the tongs… and missed.

He recoiled and in a flash struck out at the bar-b-que tongs in quick succession, like machine gun fire, striking the metal two or three times, jerking, recoiling, rattling and hissing like crazy. Miss Practical Side suddenly abandoned me, the Other Side was fully in charge now:

Yes. I know, thank you for the astute observation.

In the very brief moment before the mayhem started in earnest, I remembered the night before – grilling outside with the back door open so both the dog and I could go in and out.  As it dawned on me that the damned thing had been under the buffet all night and most likely all day, my anxiety level reached fever pitch.  The next few minutes were a battle royal between the snake, me, and both sides of my brain.  It went something like this (between blood curdling screams):

Snake retreats swiftly to safety under the buffet: “Good gawd, the woman’s a lunatic!”

Practical Side of brain: “You’re in a t-shirt, shorts, and barefoot for goddsake…get something on your feet before pursuing!”

Practical Side:  “Dog is awake now, better put her in the bedroom. Don’t lose sight of the snake though – you don’t want it slithering somewhere else”

Snake (from under the buffet): “Good gawd, the woman is a lunatic!”

Practical Side: “For the love of god shut up OS!!  Now missy, get those pillows off the couch…what? Yes, the ones with the tassles that you handmade with the $14 per yard trim.  Stuff them under the buffet to trap the mother fu…  uh, Rattler.  Then go get your boots from the garage…”

Other Side:  “BUT I HAVE AN EFFING RATTLESNAKE IN MY DINING ROOM!!!”

Practical Side: “Yes, you’ve mentioned that already. Like I was saying, stuff the pillows under the buffett, yes, that’s right, good girl.  Now go get boots from garage and put dog away.”

Practical Side: “Ignore her missy, she can’t be in charge, she’s a lunatic.”

And on and on for what seemed like an hour but was actually about 5 minutes. I couldn’t stand the mental arguing and my heart was ready to pound out of my chest.  The Practical Side suggested  I call in reinforcements . I called my neighbor (without taking my eyes off the buffet) – no one home.  I called my friend Paige – I knew it was about time for her husband to be off work, maybe he could help.  She was at the hospital tending her 90 year old mother and I’m sure had other things on her mind than an “EFFING RATTLESNAKE IN MY DINING ROOM!”  She told me she would get a hold of her husband Mike to come over right away.

She also reiterated what the Practical Side had said earlier “don’t lose sight of him, keep him where he is until Mike gets there.”  I thought I responded quite calmly with my Practical Side securely in charge – she told me later – NOT.

I sat in the middle of the dining room floor, now sporting knee hi boots, running shorts, a tee 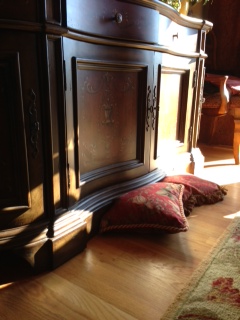 When Mike arrived I threw open the door in relief.  By the look on his face, I must have been some sight. He eyed my less-than-fashion-forward outfit curiously. (No, I wanted to say, this isn’t some cheap imitation of every man’s fantasy….can’t you see I’m terrified??)

The Other Side started to screech: “THERE’S AN EFFING RATTLE SNAKE IN MY…”

Snake (from under buffet): “oh brother…”

The Practical Side (jumping in): “Oh thank you for coming – he’s under the buffet, on the far side, come here…I’ll show you”

I handed Mike a broom and the bar-b-que tongs I’d been jabbing at him with.

The Other Side finally retreated momentarily. (“If I show up now, this guys’ gonna think I’m altogether insane!”)

Snake (from under the buffet): “…you got that right.”

Practical Side: “all of you shut up, we’ve got work to do”.

While Mike got down on all fours I went out to the patio for the other set of tongs.

When I came back in, Mike had flushed the snake out from under the buffet and was grabbing repeatedly at him with the tongs I’d given him.  He was

writhing and striking and spitting — the snake was too. Boy – he was one pissed off snake!

Mike was grabbing at him but as much as he squeezed, he just couldn’t seem to keep hold of him with the tongs.  He did manage to trap him long enough for the Practical Side in my brain to shout at me “NOW! DO IT NOW!! GRAB THE BASTARD BEHIND THE HEAD!!” which I did on reflex with the other set of tongs.  Mike threw open the French door and I ran out holding the thing at arms reach with it writhing and coiling in the air.  When I reached the dirt I held him there until Mike could grab a shovel and come finish him off, which he did with grand style and finesse.

With the dirty deed behind us we walked back in the house, kindred warriors prevailing in battle.

Mike held up the tongs I’d given him and said “WTF??”

When he pressed the tines together, they only came within an inch of each other, they wouldn’t and couldn’t close completely.

We laughed – that explained a lot. As he was leaving, Mike patted me on the shoulder and advised, “You might want to sit down and pour yourself a big glass of wine.”

Other Side of brain: “Wine hell, I need a double malt scotch on the rocks.”

Practical Side: “Y’know OS, you really should work on your language, you’re sounding like a truck driver…”

Other Side: “Oh go eff off Practical Side!  If it weren’t for me, you’d still be playin’ the piano all evening with an effing Rattlesnake hiding under the effing buffet in your effing dining room.”

Snake (lying in the dirt in his last breathless, hissless moments): “GAWD, get me outta here, that blonde broad in the ghastly fashion ensemble is a certifiable lunatic… ZZZZZZZzzzzzzzzz…….

10 Comments to “Dinner Guests Are Welcome — Unless They Want Me As The First Course!”