Little Prince George Conquers the World…(even before arriving in it!) 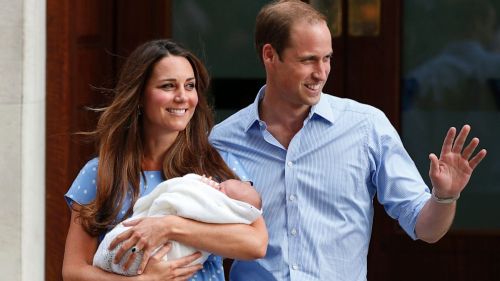 Mood Reading:  ZZZZ’S (woke at 4 am and contemplated the world for all of 23 seconds.  That is the last thing I remember until waking again a 6:15.)

So bonnie Prince George hadn’t even been born yet much less named, when he’d already made quite an impressive little spectacle of himself. For days before his rather

ceremonious world wide debut, the press — hailing from far and wide — camped out on the steps to St. Mary’s Lindo wing like eager tech hungry teenagers lining up for Apple’s latest i-something, days and in some cases weeks before the eagerly awaited, highly anticipated and ridiculously over-hyped inaugural royal appearance. What better marketing opportunity for salivating tabloids than that of the little royal bum being escorted into a celebrity crazed world via Internet, twitter, and god forbid, the

National Enquirer and People magazine.  The level of intense media scrutiny surrounding this otherwise natural everyday occurrence in the human race hasn’t been seen since…well….that of his father’s similarly

hyped little bum over 30 years ago.  I’d like to claim that I followed every last detail and development right down to the toppings on the pizza delivered to St. Mary’s and the number of stitches in the royal gateway to the British throne, but the truth of the matter is, I didn’t follow it as much as it followed me.

Early in the week, every time I turned on the television to catch up on world events, 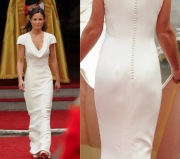 all I could find were desperate reporters filling hours of empty air time discussing everything from Kate’s awkward private school years, her sister’s reportedly stellar derriere, and her mother’s not-so-overambitious plot to corner a prince, to William’s over exposed upbringing and his parental marital soap opera – a rehash of his wonder years.

Now I’m as much a Royal watcher as the next person.  I even have in my possession several tea cups sporting images of Charles and Diana, a thimble celebrating the Queen’s jubilee, a tea pot commemorating the wedding of Kate and Will’s, and a lowly dishtowel eerily indicative of the doomed union of Fergie and Andrew.  I am no stranger to the seduction of pomp, circumstance,  and the

lilting strains of God Save the Queen.  But by Tuesday, even I was fed up with the endless stream of regal bull sh***ing by “Royal Experts” who’s speech was akin to the King’s but who obviously knew little more than the viewers they were trying to impress.  With the George Zimmerman trial in the rear view mirror, and the events in Egypt, Afghanistan, the Supreme Court and Congress drawing nary a yawn, the royal birth seemed to captivate more than a few national and international imperial observers.

All I could think of when I witnessed Will, Kate, and the royal baby bundle eventually emerge on the steps of St. Mary’s was “how on earth does she do it – looking so

great and with such aplomb?”  I remember clearly how I felt less than 24 hours after the birth of my firstborn.  I had awakened with bed head, was exhausted from pushing for 17 hours, had two bricks forming where my boobs should have been, and had stitches stretching from this side of Montana to Kingdom Come.  The very last thing on earth I would have wanted to do is gingerly waddle out to a throng of waiting reporters and cameras, smile ever so politely in the process and exclaim sweetly “this is a very special time for us all”.  In fact I can vividly recall thinking in no uncertain terms that the whole world could go to hell in a hand basket…and the sooner the better.  Just give me my baby, an ice cube to suck on, and another dose of Vicadin thank you very much, and don’t bother me again for another 6 weeks.

To hear one of the aforementioned nobility experts claim that Kate “is the perfect royal because she has now produced a male heir to the thrown – and it doesn’t get any more perfect than that” was not only particularly nauseating and degrading, but an affront to women (and daughters) everywhere, in any walk of life.  That is was factually incorrect according to the latest change in the British monarchy approved by the Queen herself, only heightened the distaste. At this point I found myself longing for a break in this overwrought over worked news cycle, anything lord to get these twits off the air… a natural disaster, an uprising somewhere, even a tawdry little political scandal would do at this point… 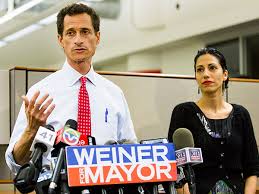 And Voila!!! My prayers were suddenly and unexpectedly answered.  In waltzes Anthony Weiner and his hyperactive i-phone…

God bless Wills, Kate, and little George, may they all finally get the rest, peace, and intimate bonding they so greatly deserve.

And as for the press corps, they’ve already been dispatched to the back rooms and hard drives of twitter, facebook, private laptops, and tasteless (read that titillating – pun intended) pages of transcripts by one “Carlos Danger”.  That oughtta keep the buggers busy for a while and perhaps give the rest of us a much needed break.  Maybe we can all focus again

on the important challenges facing this great nation….like what the heck is going to happen in the most gripping, never before seen 2-part conclusion of this year’s Bachelorette season….

5 Comments to “Little Prince George Conquers the World…(even before arriving in it!)”