Yesterday was one helluva long day… so you’ll have to bear with me.  I’m operating on a few hours of sleep and lots of caffeine. (Lousy coffee at that – blogging ‘from the bedside’ this morning nursing a slight headache with only the room carafe coffee to get me through!)

Was a ton of fun though yesterday, beginning with the General Assembly, moving to the breakout sessions with Elite Vaulters and Coaches teaching, and winding up with one heck of a competition last night (and “after party”) with Renauld Lavillenie clearing 19’ 2 ½” to win.

I took lots of video with my phone so I’ll let the pictures do the talking, but again be forewarned, I’m obviously not a photographer so you’ll have to bear with the quality.  Unfortunately I didn’t catch the winning jump by Lavillenie  but if you check youtube: Chappellvideos later today it will be there. (Proprietor hasn’t posted it yet because he’s been a little busy… at this writing, he’s been over at the arena since 6:30 this morning overseeing a bunch of hyped up vaulters in 60 some odd competitions…)

So…here’s how the day unfolded:

participants this year: (On the way, look who I ran into in the hall.  Jordan Scott always comes dressed head to toe for the occasion! )

At the end of General Assembly, folks gathered to mingle with athletes and get autographs before break out sessions:

Beginning vaulters receive instruction (most were under age 11 or so:)

By later afternoon, some of the staff were getting punchy.  No more caffeine for this guy:

Then it was over to the arena for the Elite Competition:  the following IAAF article covers it better than I could ever hope to (professional writers who actually get paid tend to do a better job!) so take a gander if you’re so inclined for all the in-depth results:

But here’s some video from the stands to get the live flavor:

And Renauld Lavillenie lit the place up with the winning jump 19’2″:

After winning the competition, Renauld Lavillenie talks to his coach Phillippe d’Encausse.  (He is also coached by Phillipe Collet—both coaches were former French champions.):

Renauld Lavillenie is swarmed by autograph seekers after the competition:

Lavillenie autographs continue after competition – we were worried we weren’t going to be able to get him out of the arena.  He was terrifically good natured and signed and posed for photos for over an hour after the event:

So, now you know why I’m moving slow this morning!

Today, as soon as I’m finished posting this, I will head to the arena for a full day of competition and gadding about.  Aside from the excitement of a days worth of Personal Records at every level and non-stop competition, it’s always fun to run into all the friends you haven’t seen in a while, and meet the news ones coming up.

My coffee’s cold so better quit, I’ll try and do a re-cap tomorrow or the next day  From the National Pole Vault Summit, so hope to see you back here then! 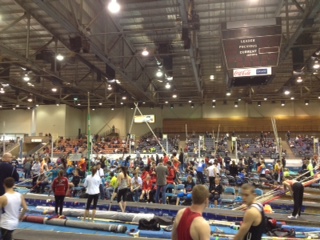