When the Greatest Gifts in Life are the Unexpected Ones…a daughter in-law’s tribute.

Just 6 weeks before her 91st birthday, my mother in law succumbed last week to the disease she’d been fighting for several months.  It was with great sadness and sense of defeat that we watched as her fighting brave spirit was ground down by the only persistent foe with the stamina to keep up with and finally beat her – cancer.  She was a formidable woman; smart, quick witted, extremely energetic and determined.  She fought her disease the way she lived her life: with determined conviction, a strong sense of direction, and a stubborn streak as wide as the English Channel.  She had a feisty but charming personality that sometimes overshadowed her more caring nature and generous heart and she was, initially at least, an intimidating presence to this American newlywed. We both learned over the years to respect, understand, and finally to enjoy and love one another in spite of our

respective different cultures (read that: ‘funny ways’) and a language barrier we both struggled through… her Queen’s English to my Yankee slang.  And though it sometimes felt we were speaking in foreign tongues, in the end, we well understood each other’s heart – mother-in-law to daughter-in-law, woman to woman, and finally and most importantly, friend to dear friend.

I met Heather for the first time when I was an 18 year old student travelling on summer holiday who happened to be smitten with her son.  My girlfriend and I were houseguests at “Langdale”, the Chappell home in Amersham, England — the same one she lived in until the day she died.  We came bounding down the stairs on the first morning of our visit — two young California girls — flipping our sun kissed hair and rigorously chewing our Juicy Fruit gum. (for what 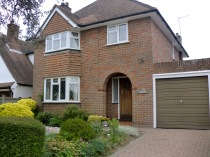 other way do teenagers chew but rigorously?) We were greeted on the bottom step with a wilting glare and immediately chastised for the smacking and popping sounds we were making. With a withering impersonation, Heather only-half-jokingly imitated the pair of us and admonished,  “You Americans and your gum.”  (It was the first in a long line of conversations beginning with “You Americans…” and for several years I felt like the unofficial diplomatic ambassador upon who’s response rested the representation of an entire nation.) Needless to say,  I never chewed gum around her again.

She was a fabulous cook who “only cooked from scratch”, as my husband reminded me on more than one occasion.  The thaw in my formal relationship with her came during a visit at Christmas time to England.  While in her kitchen helping with dinner, I implored her to teach me her secret to a flaky pie crust and also asked how to make the notorious gravy my hubby raved about.  She patiently demonstrated the pastry (her recipe is still the one I use today) explaining the importance of cold ingredients  and “gingerly” – I love that word – rubbing the butter in by hand.  As for the gravy, she pulled me into her pantry and ever so covertly pressed a packet of Bisto

mix into my palm whispering “take this home, dear…he’ll never know the difference.” It was the beginning of a quiet alliance and mutual understanding about the unique “peculiarities” of the Chappell men, and it was a foundation from which grew a true and genuine affection for one another. Though I was still loathe to cross her in those early years (for her opinions and defense of them were as strong as mine were flippant) over time we found common ground and dropped our defenses long enough to appreciate if not wholly embrace, the other’s point of view.  Especially when it came to child rearing.  To say we had different parenting styles is a colossal understatement, but the goals and values we wanted instilled in them were exactly the same…to raise caring, conscientious and well-mannered boys with strong spines but gentle hearts. Especially in our later years, we congratulated ourselves and each other on succeeding.

As stern a disciplinarian as she was, my boys adored her.  They both have memories of a selfless grandmother who gave them special time and even more special memories: running to the bottom of the garden fence to watch the trains arrive and depart to London, riding the second hand bicycles bought from a “boot” sale around the back garden, taking them to fetes, carnivals, miniature villages or just the train station up the road .  She had a way of making the usual seem like a special event.  When serving them simple soft boiled eggs, she would cut the 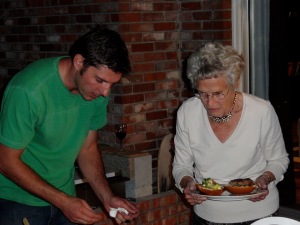 toast into thin strips calling them ‘soldiers’, adding that it tasted better that way.  They ate every crumb. On one occasion she had Granddad take our oldest son Michael on the train just two stops up the railway line so they could ride it back and wave to our youngest son Christopher, who was standing with her at the back garden fence, giggling and waving wildly back at them as it whizzed by. And they loved (as we all did) her famous deserts:  Apple pie with custard sauce (another shared secret packet tip), raspberry meringues, trifle, and the boys all-time favorite, gooseberry crumble topped with fresh cream.

Over the years she and I got to know one another as the individual women we were, instead of the roles assigned to us by the marriages we’d entered into. I learned of her strong convictions regarding aid to the less fortunate. And of her need to make a difference and not only stay involved in her community, but to lead the way in contributions within it. Though she was a traditionalist with conservative leanings, I found her to be fair, open minded and progressive about issues facing generations to follow, recognizing that the world was a changing place.  She truly had an independent and adventurous spirit, which was fostered in her younger years. Wanting to pursue a Nutritionist course in London on her own as a 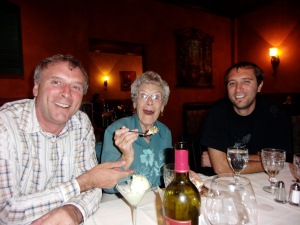 young woman when war was looming, she vehemently objected and forever lamented that it (and her father) cut short her ambition, relegating her to the safety of the British countryside. She spent a lifetime making up for it.  She was active to the end, travelling to America well into her 80’s and working at her various charities up until her death.  She worked her regular shift at the Red Cross shop the day before her cancer surgery. She kept current and sharp through a variety of good works and deeds, Scrabble tournaments, a wide circle of friends and family,  and through written letters of which she was particularly renown – especially if you didn’t respond to them  (and no, email didn’t count!)

She will be greatly missed by her husband of 67 years Allan, her loving family, the community she served, her many, many friends and neighbors, and by one particular American who gave up gum, took up tea, and grew to love and appreciate the accomplished woman she was.  I am thankful that in the final years of our time together we were no longer the very British Mother-in-law or the spokesperson for America – we were close confidants and caring friends, who were seemingly unaware of when the transition took place. 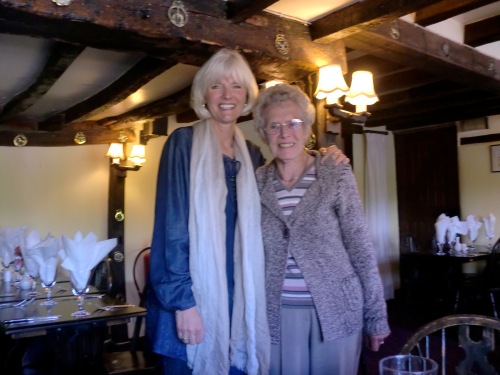 17 Comments to “When the Greatest Gifts in Life are the Unexpected Ones…a daughter in-law’s tribute.”