If it’s Tues, This Must Be…Barcelona?

Mood Reading: ZZZ’s (actually just woke from a nap on plane and not feeling too bad – only 4 hours to go until we’re back in the ol’ USA)

I’m flying the friendly skies again — heading for home after a whirlwind but wonderful trip to Barcelona and England, all in 10 days.  Have had a cuppa (tea), a ‘biscuit’ (shortbread cookie), and half of a watercress sandwich made by the hubby in his mum’s kitchen early this morning, and am feeling pretty chipper – gotta love the British way, we always take as much of it home with us as we can.

Just flipped through all the pictures in my camera to refresh my memory about the heat, flavor and late night sizzle of Barcelona which seems so distant now after the constant cloudy, drizzle of England, but was in reality only last week. After a rather

inauspicious beginning marked by lost bags and sleep deprivation, the full-on Catalonian experience and not-so-guided tour kicked off in earnest when I paired up with a friend, one of the other coach’s wives, who had a keen sense of direction surpassed only by her sense of adventure for the city. Needless to say it wasn’t long before we were off and running in the scorching heat clutching mandatory water bottles, cameras and assorted maps.  Having both decided to forego the qualifying rounds at the World Junior Track and Field Championships which our husbands were attending (and which somehow would go on without us), in favor of the Gothic quarter, sidewalk café dining, and all things Gaudi, we were prepared with an extensive itinerary and wasted no time in getting started. 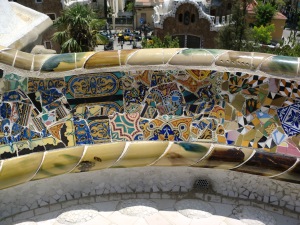 We huffed it up the steep streets to see the sweeping (and by mid-morning, searing) views of the city from Park Guell, one of Gaudi’s famous designs with meandering paths, extensive gardens and distinctive architecture.  Built in the early 1900’s, it was originally intended as a housing development but ultimately only produced two houses, one of which the Gaudi family moved into after it didn’t sell readily.  (hmm, any modern day contractor’s dilemma it seems!) As with all his designs, Gaudi culled

his inspiration for the project from shapes found in nature and apparently, the famed and rambling mosaic bench at Park Guell was inspired by the imprint of a workmen’s backside left in cement during it’s construction.  I wonder if he realized at the time what he was leaving ‘behind’!

After recovering over Paella and a bowl of fresh fruit, we continued on to La Sagrada Familia, or “holy family church”.  It was Gaudi’s most

ambitious project and construction is still ongoing with current contributions from the community. The cathedral is stunning and it’s exterior belies the surprisingly open airiness of the interior. Looking in every direction is an artistic feast for the eyes but since words to describe it seem hopelessly inadequate, I’ll just show you some pics:

After marching around in the hot sun, queuing in tourist lines, sweating like pigs, and then packing ourselves into the normal crush of the subway rush hour for the journey back to our respective hotels, we smelled I’m sure, as aromatic as the local farmer tilling his fields in the midday heat. I’ve heard people complain stateside about the lack of deodorant in European crowds – I’m here to tell you – their rigorous, physical daily routine is just no match for Arrid Extra Dry. At home, it’s quite easy to step from the shower every day, blow dry the hair, drive to your destination in an air-conditioned car and arrive on the doorstep looking fresh, dewy, and perfectly coiffed.  It’s quite another to dress daily in the 90 degree heat and then walk blocks to the subway station, finding your platform (negotiating 87 flights of stairs in the process,) sprinting the last 50 meters to catch your jam-packed train schlepping all your belongings with you and arrive looking like anything other than something the cat dragged in! In fact, while I looked, felt, and smelled like I’d just competed in a two-day decathlon, I’m still amazed at how cool and altogether stylish the European women looked in spite of it all, and seemed quite unfazed by the whole routine!

It was 6 p.m. by the time we returned and the guys had texted saying they’d had

enough of the heat in the stadium and wondered if we’d want to meet them at a sidewalk café to take a load off, and maybe even sip some Sangria while watching the city come back to full throttle after the afternoon siesta. My friend and I took a bedraggled look at each other and took about two seconds to chuck the notion of the hotel break, the shower,  and the “little rest” before dinner —  this was just what the doctor ordered!

5 Comments to “If it’s Tues, This Must Be…Barcelona?”