View ‘from the front porch’: 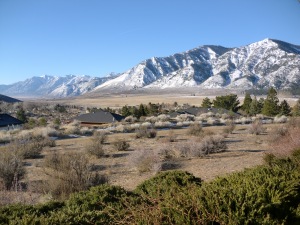 (Measured in Z’s, for how much sleep the night before – 5 being great!)

Woke up feeling mighty perky this morning, considering… Our friend, vintner, and wine-maker extraordinaire John hosted a ‘barrel’ tasting yesterday afternoon at his “winery” just around the corner from our house. Several friends and enthusiasts (not a true connoisseur among us, but we know what we like) tasted his wines which have been stewing only a few months against some of the finished product from that purveyor of the finest – Trader Joe’s. Have to say, two-buck chuck couldn’t hold a

candle to Jaunty John’s private reserve, even at it’s young, tender, and underdeveloped stage. Needless to say it was an entertaining and convivial way to spend a Saturday afternoon.  Plied with wonderful nibbles courtesy of the attendees and some rather outstanding young wines, we tasted and tested until we were toasted! (That’s a bit of an exaggeration actually, but I couldn’t resist…) And what about the tortured, struggling artist? The nose to the grindstone, slaving writer filled with angst chained to her laptop at the kitchen counter?  Ah well my friend, it all comes under that useful little category called “research”. Real life events, and the people in them, always provide the best fodder for a good story… especially when any kind of alcohol is involved!  What better way to come up with intriguing situations, some compelling dialogue, and even in some cases, the most interesting or obnoxious characters…right?  And now that I’ve put the fear of god into yesterday’s participants, let me explain.

When she discovered I was writing a book, a good friend of mine gave me a great sweatshirt – on the front it says, “Careful, or you’ll end up in my novel”.

Indeed, when I had just learned that my novel was picked up by a NY literary agent and announced the exciting news to my book club that same evening, there were both some jubilant faces and some absolutely horrified expressions.  One person asked what many were thinking… “OMG! Am I in it?”

It’s a question (nay, it’s an assumption) that many have asked me about – are the characters in my novel based on people I know and are the events real?

The answer is yes, no, sometimes, none of, and all of the above.  Yes, it’s natural to use events and sometimes even circumstances that you can describe authentically because they’ve either happened to you, or to someone you know, like a wrenching divorce, for example.  If we haven’t gone through it ourselves, most of us certainly know someone who has. I’ve also drawn on a combination of personality traits in many of my friends and relatives to create interesting characters.  That’s the beauty of fiction, you can take a little of this one, a little of that one, and add all those snappy little comebacks that come to you after the fact, when you’re blow drying your hair thinking of all the sharp retorts to some rude remark tossed your way that shoulda, coulda, woulda been employed the day before if only you’d been faster on your feet.  You can write it all down as if it happened just as smoothly and effortlessly between the characters as you wished it had in real life and voila – you have a conversation much more interesting than most of your own! (Alas, I’m finding it can take hours and a lot of fore-thought to create those oh-so-witty little “off the cuff” remarks!)

And yes, I’ve even used some of my own, and my friends personal circumstances as a platform from which to launch the storyline, but… and this is a very important but, that’s where the similarities end.  No, the story in my novel is not true and the details and events that happen afterwards (and before) are entirely made up by yours truly.

This is a point I stress because when I forwarded the first few chapters to my friend Gail, who was then acting as Proof-reader In Chief, she thought she recognized one of the characters.  She called me about five chapters into the novel, in a panic.  “OMG! Deb, I don’t know if I should be reading all this, it all seems so private – it’s like reading someone’s diary.  I had no idea this had happened or that one’s child was adopted, or  blah, blah, blah…”  I had to stop her. “GAIL! It didn’t!! It’s F-I-C-T-I-O-N!! I made it all up!”  Needless to say, she (and her husband who’d been listening to the seedier tidbits) was greatly relieved.  They both can now come to my social gatherings without feeling like the gynecologist who runs into their patient at the local community bar-b-que.

There has been a few here-to-fore highly regarded ‘non-fiction’ authors recently in the news who’s entire careers have crashed after suspect problems regarding their stories were revealed publicly- namely their claims that the events in their their so-called “memoirs” really happened when in reality, they hadn’t. (Think “A Million Little Pieces” and “Three Cups of Tea”) It all got me to thinking…am I going to have the opposite problem?

And a little note to those who attended yesterday’s wine-tasting event…not to worry, any little indiscretion that would otherwise make a big juicy anecdote in some unscrupulous writer’s future blog can be mitigated by a small donation…just make the check out to the “Contact” information found on fromthekitchencounter.com.