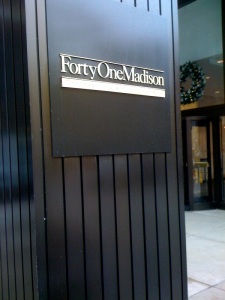 Now I know what it must feel like to be Eli Manning waking up on game day for the Super Bowl. I immediately rushed to the hotel window to check the New York weather…drizzling, but not raining hard.  The meeting with my new literary agent was scheduled for 10:30, since it was just past 6:00 a.m., I had plenty of time to grab some breakfast downstairs and come back to the room afterwards to get ready.  I picked up the New York Times that was sitting outside the door when I headed to the elevator, and tried to read it while eating my oatmeal.  For what I comprehended, it may as well have been printed in Latin.

When I returned to my room, I showered and dressed, choosing my black suit, red camisole and heels.  Throwing on my overcoat, I quickly tucked a copy of my manuscript into my briefcase and headed downstairs to hail a cab.  When the driver asked me the address, I grinned from ear to ear and replied,  “Madison Avenue”.  He must have thought I was a bit “off”, sitting there in the back seat smiling and smiling to no one in particular. He kept stealing glances at me from the rear view mirror while negotiating the morning traffic.  My grin widened and I giggled aloud when we actually made the turn onto Madison, (at which point I damned near broke into Sinatra’s “Start spreadin’ the news…”) The beneficiary of my soaring good spirits, the driver finally cracked a smile himself when I handed him a big fat tip for the less than 10 minute ride. It was raining a little harder when we arrived and had taken way less time than I’d anticipated – I was 20 minutes early.

I entered the lobby of the towering skyscraper and approached the receptionist.  “Is there a place I could sit and wait?” I inquired, not wanting to show up at the [La-Dee-Dah Media Group] offices before my appointed time. It used to bug me when people would arrive early at my real estate office and insist on hovering around my desk until I was ready for them – I didn’t want to be one of them. She informed me that unfortunately, there was no sitting area – so I was more or less forced to loiter around hers for the next 15 minutes, repeatedly checking my iPhone for the urgent messages I knew didn’t exist.  Finally, I couldn’t stand it any longer. I walked the length of the long lobby past the guard and security desk, and attempted to push through one of the turnstiles located at the end of the building leading to the elevators.  Blocked by a thick steel bar that wouldn’t budge, I watched in humiliation as another patron walked quickly around me (with a hint of a smug little smile) swiped a plastic key, and sailed through effortlessly.  Taking pity on me, the guard I had just stridden past discreetly came to my aid and re-directed me to the security desk for a temporary pass. He took my picture, handed me the freshly minted photo ID required for visitors, and buzzed me through the turnstiles.  I stepped into the waiting elevator along with a gentleman dressed in what looked to be a very expensive business suit. Trying to recover a measure of my dignity, I flipped my hair and pressed my designated floor button with as much air of authority as I could muster.  I retreated to the rear of the elevator car, sent myself another text to avoid eye contact, and secretly hummed Frank Sinatra all the way up to the 36th floor.

The doors of the elevator slowly opened.  I stepped into a wide area encircled with glass that serves as the lobby of the [La-Dee-Dah Media Group.]  Beyond the glass I could see the rows of shelves displaying all the books and authors they represent. The entrance into the agency itself is through a large glass door with another security button that buzzes people in and out.  I brushed off my black overcoat (for the umpteenth time), straightened my shoulders, took a deep breath and rang the buzzer.  A friendly woman greeted me and offered me a seat just inside the door.  I told her I had an appointment and was a bit early and was happy to wait. She said, “You never know schedules around here, she might be ready for you now, I’ll tell her you’re here.”

I barely had time to still my beating heart.  My agent appeared in short order, walking toward me with a warm smile and outstretched hand.  I liked her immediately.  She had a firm handshake, easy manner and was dressed in a casual loose skirt and sweater.  With curly blonde hair that was bit wild in that confident, I-could-care-less sort of way, and comfy looking flat ankle boots – she totally contradicted my pre-conceived notion of the severe, power-suited, Fifth Avenue diva that could hand me my head on a platter if she so desired.  She was so much not the perfectly coiffed, Devil-Wears-Prada type that I’d half expected and more than feared, I hoped she didn’t notice the audible sigh of relief that escaped when I shook her hand.

She invited me back to her office, which was a good size (probably considered huge by New York real estate standards) with a large picture window overlooking Madison Avenue.  It was neat and professionally appointed but not over-done.  It didn’t have stacks of manuscripts, piles of loose papers or bursting bookshelves like one might imagine.  I could tell at once she was very organized, efficient, and spent a lot of face time reading on her computer screen monitor.

As we walked in, I handed her the two bottles of California wine I’d brought as a holiday gift.  She seemed genuinely surprised and delighted, thanking me and adding, “How very sweet of you!!”

“How’d it go yesterday – tell me all about it!” she asked as she settled in behind her large contemporary desk, motioning for me to sit in one of the comfy chairs across from her.  She wanted to know all the details of my meetings and was eager to hear my thoughts about the two editors I’d met with. We discussed my impressions of each and when I asked, she offered her opinion about them both as well.  We talked for a long time with ease and comfort and we eventually both agreed on which editor we thought would be best for my project, and why.  I didn’t feel rushed or intimidated or even nervous as in our prior conversations.  Perhaps it was the fact that I was finally here in person, speaking in a professional setting, wearing a business suit, instead of standing in my jammies and slippers next to my own kitchen sink filled with breakfast dishes, on the receiving end of an unlikely and wholly unexpected telephone call.

She mentioned the importance of  “platform” – an established following, so to speak. She asked me if I had a “blog” and was on Facebook and Twitter .  (I inwardly grimaced at the whole notion but… here we are, some six and a half weeks later with two outta three!) She encouraged me to begin, the sooner the better, saying I should try to widen my audience.  “You want as many readers as possible interested in your story even before its published. Y’know, you need to appeal to more than just the Bergdorf-Goodman crowd…”  Hmm, there was that name again, the same one my friend had mentioned when I first arrived in the city.  I made a mental note to ask the concierge about it when I returned to my hotel.

We then discussed some of her background and how she came to the [La-Dee-Dah Media Group].  She explained that it’s founder and President,[Mr. VIP Himself] and she had worked together at [Only-The-Biggest-Media-Entertainment-Agency-In-The-World] where she was Senior Vice-President and he was Executive Vice President and a sitting member on the Board of Directors.  When he left to start [La-Dee-Dah], he recruited her to join him.  She had by that time been teaching film at NYU, headed up the New York branch of United Artists, and had been a talent agent for several notable stars.  She explained that the stress of it all had taken its toll, so when [Mr. VIP Himself] called, she jumped at the chance. She welcomed the return to her literary roots, and developing new writers in particular.  Within a few short years, [La-Dee-Dah-Media-Group] has become recognized as one of the most prominent, highly regarded leaders in the literary world. I told her about my prior years in real estate and how I came to write my book, but decided it was somehow not the appropriate time to boast of my own illustrious television career as the local “Carpeteria Lady.”

One thing that continues to stick in my mind about the entire conversation was that at some point she explained to me that she had come from a family of writers – her father was one, she is married to one, and it’s “in her blood.”  She said that in her profession, she spends most of her days reading. “It doesn’t take long to figure out who has it and who doesn’t.”  She looked over at me and added, “and you have it.  I want you to know that this is a lengthy process and I’m in it for the long haul… if you are.”   (This exchange had me walking the 15 blocks back to my hotel afterwards, in the pouring rain, high heels, shouting excitedly into the cell phone at my husband without my feet ever touching the ground!)

As I prepared to leave her office, she asked me if I was going to do anything fun while I was visiting…a Broadway show perhaps? I told her I was treating myself that evening to a new comedy that had just opened called “Seminar”.  I’d heard about it that very week on NPR (National Public Radio) – about an egotistical former editor who critiques young writers (totally apropos, I thought).

I explained, “It’s starring that actor who plays the bad guy in all the Harry Potter movies.  I can’t remember his name… but I heard him interviewed.  I love his voice – I think he played the Sheriff of Nottingham in the movie Robinhood as well …”

She said enthusiastically, “Oh you’re going to love it, very funny, I saw it when it opened last week. The actor’s name is Alan Rickman, he’s terrific.”

She smiled… “I used to represent him.”